Behind the Scenes at Mountain Jam

Hello! Sorry for the radio silence…the mountain doesn’t get the best service on-site. But I wanted to share some of the fun stories from Mountain Jam…

After checking out of our awesome room at the Kaatskill Mountain Club, we headed on site to put the finishing touches on the booth, and waited for the gates to open to the public. Eventually, the gates opened up around 5pm and the festival was under way! Railroad Earth kicked things off on the Main Stage at 8pm and debuted a track off the new album they have coming out with Warren Haynes. Then Marco Benevento and moe. took turns jamming for the rest of the night on the two Main stages. All in all it was a smooth start to the festival, and great to see many of the familiar faces that we hadn’t seen yet this season!

Oh Friday! Nothing like that feeling of waking up bright and early to a hot, sweaty tent that is cooking in the sun and feels like 100*…but on the bright side it was a nice clear and sunny day! The booth was rockin…the crowds were fun…but then the clouds rolled in quickly around mid-afternoon. I kept checking the Doppler and watching many storms just miss us without a single drop of rain, and we looked as though we were going to be safe from any crazy storms. So off I strolled to catch the 4:20pm Joe Russo’s Almost Dead set. Luckily, I changed into my mud boots and brought a poncho just in case…and boy am I glad I did! Just as they were opening up the jam in Terrapin Station, the skies listened and also opened up on all of us in the crowd! As the rains fell harder, the band played harder in perfect synchronicity, and we all loved it. Throughout the rest of their set the rains continued to fall, but the crowd’s spirits remained undampened and proved once again that it wouldn’t be Mountain Jam if it wasn’t Mountain Jam! 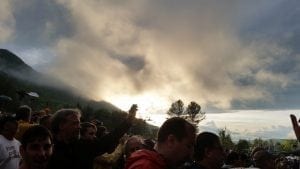 After heading back to the booth and cleaning up some of the items that got a little wet during the storm, we fashioned a tarp wall barrier to keep all the candy & snacks dry, but still accessible, for the remainder of the night. Eventually the clouds parted just long enough to make for a beautiful sunset during Grace Potter’s set.

Later that night Robert Plant put on an amazing show that was much different than what I expected. I can honestly say, I’m very excited for his set at Lock’n in September of this year, and would suggest that if you have the chance to see him and his band the Sensational Space Shifters, you should take it! Then to close out the evening, Warren and the boys played their Dark Side of the Mule set starting at midnight, and serenaded the crowd with some amazing Pink Floyd covers. After the set, which included Welcome to the Machine, a great group of friends came by the booth to sing us their idea for our theme song: “Welcommmmmmmme toooooo Mr. B’s!!!!!!!!!!!!!!!!!” (which of course they sang EVERY time they walked past the booth, and I can honestly say, it made us laugh EVERY time!)

The clouds from the overnight rain lingered till about noon, which made for a much better way to wake up in a less hot tent! After noon, the sun came out and began to dry up all the water that was dumped on us the night before. Unfortunately, the front of our booth was muddy from all the rain, so even though the festival spread some hay and gravel to help out, I ended up having to spend the first couple of hours of the day shuffling rocks & gravel from the paths in the woods to the front of the booth so the patrons didn’t have to walk through mud to get to our booth. After getting the mud under control, I spent the rest of the afternoon replenishing the stock we were running low on, and enjoyed the low key, better weather day. I didn’t catch all that much music on Saturday, but I did have a chance to check out one of my favorite funk bands late night in the lodge. If you haven’t heard of them, you should check out the Budos Band from Brooklyn, NY! They crushed it for a pretty decent sized crowd, and then got called out for not one, but two encores! Definitely one of my top 3 favorite sets from the weekend!

The burning hot tent effect was back by Sunday morning, making it unbearable at an early hour. But again, it was a beautiful sunny day, and certainly a great way to end the festival weekend! I started the morning off right with a delicious Belgian waffle covered in caramel apples, whipped cream, and a ton of maple syrup from the cafeteria in the lodge. Definitely the right decision! Then, me, Jessa, and my sugar high headed over to see Larry Campbell, Theresa Williams & Bill Payne while soaking up the sun rays. Then I spent the rest of the day doing the Great Inventory Divide to get ready for our split booths this upcoming weekend. After getting all the shelves nice and filled up, and stuff the van full of the inventory going to Disc Jam, the crew and I headed to bed just after midnight to get some well needed rest.

So nice to wake up, and not have to break down a booth! Since we are working the Taste of Country festival at Hunter Mountain this upcoming weekend, we were able to leave everything all set up and covered with tarps just in case. We had all broken down our personal tents on Sunday, so all we had to do was change our clothes and get the heck off the mountain, and head to the closest diner for a nice big meal!

Just as I thought I was safe, and as we crossed back into CT, I received an alert on my phone, telling me that there was a Tornado Watch for Hunter, NY until 8pm! Great! The one time I get to leave my booth all set up and ready to go for the following weekend, there’s the potential for a TORNADO!!?! ON A MOUNTAIN!!?! Ugh!  So I stressed out about the impending storms working their way across NY State for the rest of the day, while also trying to get as many orders placed as possible so as to ensure our inventory would be ready to go this weekend for Disc Jam and Taste of Country! Luckily, from what I heard from the hotel on-site, there was just a lot of rain, and even though there were strong winds, it sounds like our booth is still in tact….we’ll find out for sure tomorrow!

About the Author: Mr. B