Behind the Scenes at Summer Camp

So here’s a few extra behind the scenes stories from Summer Camp that didn’t make it into last weeks blog posts…enjoy! 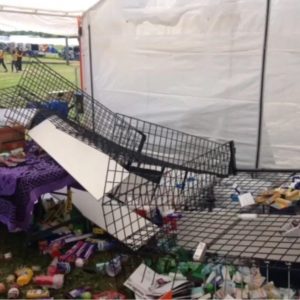 …..I get a call from Capone: “Hey, B. You may want to come down to the second booth…all of the shelving units just fell down”

So that was a fun to deal with! We rebuilt that store in no time! But it certainly taught us some important lessons about the new shelving units…bungee cord them to something sturdy! Or else!

Saturday –  While driving back and forth between the two booths, just like we had done 100 times before…suddenly the golf cart stopped dead in it’s tracks. I get the call letting me know it’s dead. “Flip the seat up, and see if there’s gas in the tank,” I said. Sure enough, there wasn’t! It was official! We had traveled 40 miles between the two booths throughout the weekend. So, Joe went and grabbed gas at the site ops compound and got the ole cart filled up and ready for the rest of the weekend. Thankfully that was the only issue with our little cart all weekend. Well that and the ranch dressing that spilled in the dump body…but that cleaned right up!

Sunday – So this story may take the cake! After dealing with the tornado warnings all afternoon, and making sure both booths were water proofed and ready for any weather Mother Nature wanted to throw our way, I was just getting the last of hatches battened down at the Second booth by the Soulshine stage, when I get a call that the power is out at the Main Booth! So I rush up there to figure out the problem. I trace all the cords back to their plugs and nothing seems to be out of place. So I go to the circuit breaker panel for further investigation and see that some of the circuits are in the Off position. I look at the info panel to see if I can figure out which of the breakers that was switched off, may be the one that is causing our booth power outage. Long story short, while flipping and testing breakers, I ended up accidentally turning on the Red Barn house lights right in the middle of The Motet’s late night set! Ooops! Luckily, Miles, the lighting tech, didn’t bash my skull in, and together we were able to figure out which breaker turned off our power and got everything all fixed up. My apologies go out to the Motet and all of their fans for potentially ruining a great jam!

All in all it was such a great weekend! I love working with Jay Goldberg’s staff, and you can always count on them to produce a great festival! Already looking forward to next year’s annual trip to Chillicothe, IL! Till then, it’s up the Mountain to Hunter, NY next!

About the Author: Mr. B